What super-sized carrot would have to be dangling from a string for you to walk across this bridge? And if you’re not afraid of crossing bridges, substitute your own fear.  And if you have none, well this post won’t mean much to you. 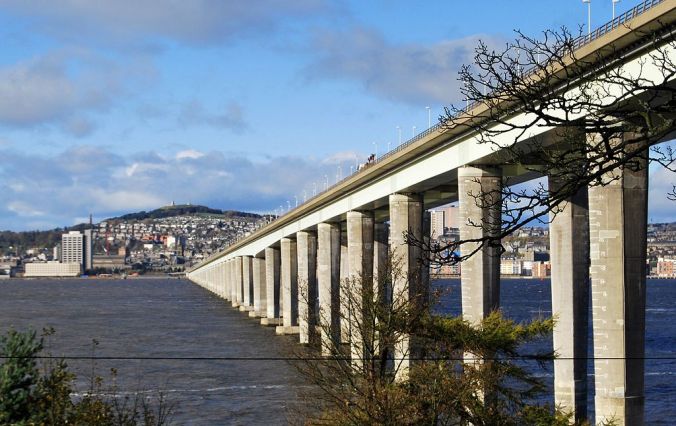 For me a year-long guided trip around the world would get me interested in taking the first steps across but I’m not sure it’s meaningful enough to make me continue. It’s what came to mind.

Moira Mason a fellow gephyrophobiac from Dundee, Scotland walked across the Tay Road Bridge this month.  First over and then aborted plans to get a ride back and walked it again according to the UK’s Evening Telegraph.

The Tay Bridge is the second longest road bridge in Europe at nearly 1.5 miles over the Firth of Tay. The Queen Mother officially opened it in August 1966.

I watched the video taken of a small part of Moira’s walk and was fixated on what she did with her left hand.  Her hand was seeking out the railing but when it found it, pulled back as if it didn’t want to touch it.  Her hand seems to be searching for something and guided by something we can’t see.  It seems restless.

I’ve experienced something similar with my hand when I’ve tried to walk across bridges or been in high places like atop European cathedrals.  My hand seems separate from me and doesn’t know what to do.  At once it wants to steady me by holding on to something, a railing, a wall, or another person, and at the same time is repulsed by touching the very thing that’s causing the jitters.

I can’t recall ever seeing another person with a fear of bridges actually walking across a bridge.  At the end of the video Moira’s body relaxes, she leans against the railing, puts her gloved hand across her eyes and enunciating every word says emphatically, “I DID IT!”  I feel her exhaustion.

Hurray!  She did it for a charity fundraiser and won her daughter a wedding.  Now, that’s an important reason.

Take the poll below and let me know what would you walk across this bridge for?  Enter your own answers.  And if you’re not a gephyrophobiac, substitute your own fear.

2 thoughts on “What Would You Put Your Fear Aside For?”