Recently a reader asked if I was afraid of heights.  I’m not sure.  Perhaps a little but I really believe my fear has to do with bridges more than heights.  But read on and tell me what you think.

A couple of summers ago I’d planned to visit a friend in Utah. Several weeks before I arrived I was asked if I’d go ZIPLINING.   In my gut, I wasn’t sure what to do.  It seemed like a challenge.  So, before I could say no, I quickly said yes.

I thought about it very little and didn’t Google anything about ziplining.  A month later when we arrived at the brand spanking new zipline, I was an uneducated virgin.

Outfitted and trained, we took the ski lift to the demo run.  Dangling in the chair and listening to the creaky cables going over the pulleys made me so nervous my head didn’t have room to think about what was ahead of me.  I was afraid the cable would snap and there I’d go into the pine trees and never make it to the zipline.

The short 100-foot demo was a piece of cake and less interesting than a Disney ride. We were fully trained and “approved” to go on the real ride – 4 spans.  We walked over to the nearly 1,000 foot span which faced the same direction as the mountain we’d just come up.  It was still a baby run.  The span was along the side of a road and not very high off the ground and no views and nothing like you see in pictures.  It was a cinch and I really enjoyed it.

We took another ski lift to the second span and the top of the mountain. As we walked to the first platform, I turned left and suddenly my world view changed.  I think I saw the entire world from there.  Heart racing.  Warning.  Danger.  I had to get down this mountain wearing this little harness and for-looks-only helmet on a tiny cable line.  For about 30 seconds I had doubts about whether I could do this or not.  But I’ve been more scared going over the Delaware Memorial Bridge than I was on this walk. 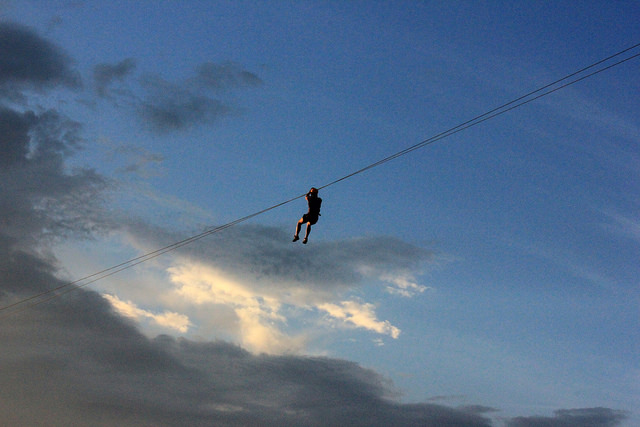 Zipline at sunset by My Photo Journey (CC by 2.0)

At the end of the afternoon, side-by-side we completed all 4 spans.  At some point my friend, who’d been studying each informational sign near the platform where each run begins, told me that one of the runs was as tall as a 50-story building.   That fact and perspective did unsettle me some as I can very easily imagine a tall building.

The  photo is not of me or my friend or the zipline we were on but looks like lots of the zipliners we watched that day. To imagine I looked like that!

The total distance covered was 9,729 feet (about 1.8 miles) and the vertical dropped ranged from 14 feet to 480 feet.  I don’t think I saw 14 feet much except at the demo run and maybe on the platforms.  Other than that, we were so very high above the trees it felt like I was in a video game.  It’s estimated that you reach speeds of up to 65 miles per hour which I really felt on the last span. Inexplicably, the entire time I had none of the anxiety, fear, or dread I do when approaching a bridge or being on a bridge.

As we waited for a shuttle, an employee asked what we thought of it. Without skipping a beat, I said something like, “I‘m afraid of heights and I loved it.”  I even told him I enjoyed it so much I’d go again right then.

I think I lied.  Am I afraid of heights?