My lifelong fear of bridges wasn’t quite so apparent until I moved to Long Island 14 years ago. I arrived and then realized if I wanted to leave, I had to cross either the:

The 135-foot high, 3770- foot Whitestone Bridge 2 miles to the west of the Throgs Neck Bridge 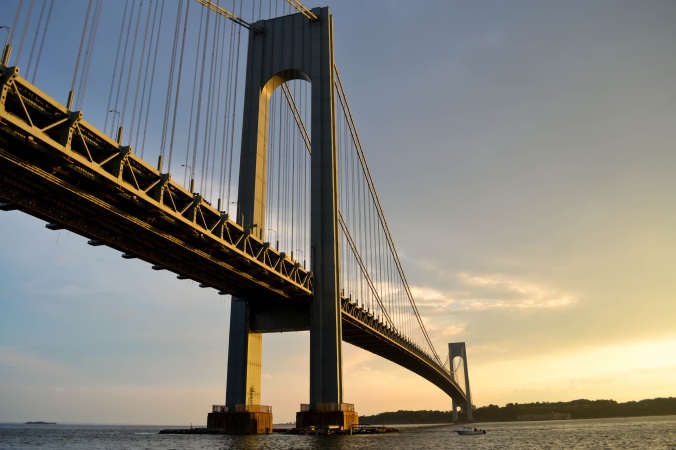 It’s ironic that these 3 suspension bridges haven’t opened up my world as they were intended to for  Long Islanders.  To me they loom too large, presenting both a challenge and a threat.  Like Gandalf in Lord of the Rings, their towers seem to scream, “You shall not pass!”

And I haven’t…alone. I’ve crossed these bridges many times as an unhappy, anxious passenger.

I’m convinced the road will run out when we get to the middle of the span, at the highest point, and the car will sail into the air.  Or maybe a tractor trailer truck will suddenly swerve into us and push the car over the side.  Perhaps the car will break down in the far right lane.  Or maybe my door will fly open.

The journey to the other side is a long, painful one.

The upside to being a passenger is that I know what won’t happen.  I won’t suddenly swing the steering wheel and aim towards the railing, break through and go over the side and plunge into the water.

Being stranded on an Island hasn’t been as limiting as it might be in some places I imagine. I have many options. There are 3 airports, an excellent rail system, and two ferry lines to Connecticut. I could take the Midtown Tunnel into Manhattan, cross town and take the Lincoln Tunnel to New Jersey. Not all the options are as desirable or efficient as driving over one of the bridges might be.

In the last 14 years, I can’t recall not going  where I needed to but if I weren’t a gephyrophobiac who knows where I may have gone.