Why did I drive over the Sagamore Bridge last fall? 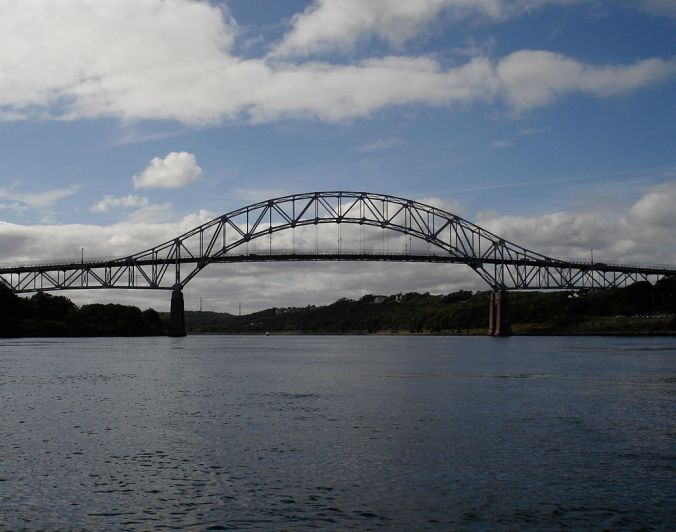 Sagamore Bridge by Shonenknifefan1 at en.wikipedia [CC0], via Wikimedia Commons

To get to the other side of course.

For most people, this is where the joke ends.  No big deal.

But if you’re afraid to cross bridges, like me, it’s a big, big deal.  And it’s not a joke.  It’s nearly an impossible feat.

Why did I do it? Because I’d committed to visiting my cousin there last October and I really wanted to go. But I had to drive there alone and cross the Sagamore Bridge over the Cape Cod Canal.

I told myself I’d figure the HOW part out later.

Later came. One afternoon I took a deep breath, sat down with my laptop and opened a map app.

Getting from Long Island to Connecticut without crossing the Throgs Neck or Whitestone Bridge is easily done by driving to the end of the North Fork of the Island and taking the ferry to New London.   Once across the Long Island Sound, the Southern New England geography gets hairy for a gephyrophobiac.

When I look at a map of Southern New England, specifically New London, CT east to Cape Cod, it reminds me of the Thanksgiving Turkey I’d drawn in elementary school by tracing my hand with a crayon.  Water, land, water, land, water, land, water, land. That’s because the southern parts of Connecticut, Rhode Island (the Ocean State), and Massachusetts (the Bay State) are full of rivers, streams, ponds, and reservoirs.  The water is running south to the Long Island Sound and the Atlantic Ocean.

The map app proposed three routes.  Inch by inch, curve by curve, zooming in and out, I followed the aerial views of the 3 routes to ferret out bridges.  If I saw water or any hint of it, I hunted for bridges.  It took time.  I verified.  I re-verified.  Some bridges, like flat, very short girder bridges would be no problem for me.  Others I couldn’t.  I wouldn’t.

These 3 would be impossible:

The third and most northerly route looked the most promising.  I’d drive north and around Providence, RI and then head south towards the Cape.   Like this.

My Route from Long Island to Cape Cod in Purple

But ohhh the questions I anticipated about why I was  going “THAT” way.

People seem to enjoy discussing and debating one route over another and defending their preferred route and challenging everyone else’s.   You might know how this goes.

“You should go this way.”

The primary route proposed would takes 2 hours 30 minutes and 129 miles.  My preferred route estimate was 2 hours 55 minutes and 142 miles.

For only 25 minutes and 13 miles more, I’d be taking the only route that gave me a chance of making it to the  Cape.

Check back in a few days to see how it went.

One thought on “How a Gephyrophobiac Takes a Road Trip. Part 1”